When I was very young, I thought this charming house at 289 Burnhamthorpe Road came straight from a fairy tale. With its stone walls, sweeping roof and trim painted in pastels of yellow, green, and mauve, surely the Easter bunny must live there! Soon my whole family was calling it the Easter Bunny House, but we knew nothing about its history. It has been my pleasure now to learn more about Frank Ridley, an extraordinary individual who designed and built this house in 1945 and lived here until his death in 1985. 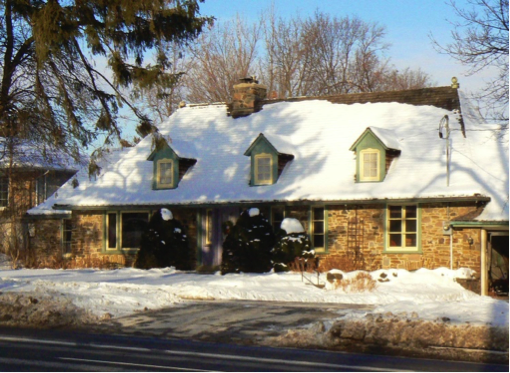 289 Burnhamthorpe Road
Frank was born in London, England in February, 1904, the son of John Ridley and Agnes Fretwell. John was a naval architect, and the family moved frequently, following John’s work. In 1909, John visited Canada and found employment in the Collingwood shipyards. His wife and two sons, Frank and Robert, joined him in 1911. The family moved to Winnipeg the next year where John started building houses. A daughter, Doris, was born in 1914.

During World War I, there was a business slump in Manitoba, and the Ridleys, with friends - the Seeback family and the Packer family - decided to homestead 120 miles north of Winnipeg in a tiny settlement called Dallas. Each family bought a quarter section of land (160 acres) for $10.00 and they lived in cabins they each built within one mile of each other.

With support from neighbours in the local Cree Nation, the families quickly became “bush-wise”. They learned how to clear land, stuff moccasins with straw in wet weather, break sod with oxen, and use rifles and axes effectively.

In 1916, John Ridley found work with the U.S. Emergency Fleet in Milwaukee, Wisconsin.  His family joined him so the children could attend school. Frank discovered the Milwaukee Public Museum, which specialized in natural history. He spent hours in their archeology department, which whetted his appetite for what would become his avocation later in life.

During the post-war slump, the family returned to their Dallas homestead. However, Frank soon left to try his hand building houses in Winnipeg, but he kept in touch with Jimmy Seeback and Arthur Packer, his boyhood friends from Dallas. In 1926, Jimmy was working in the Port Arthur flour mills, and invited Frank to join him there, where they earned $1.00 an hour. Soon both young men left for Toronto and worked building the Royal York Hotel.

In 1930, Frank and Jimmy were rooming with Elsie Packer Hawkins, a friend from Dallas, in her new house at 128 Foxwell Street in an area called Lambton Park, east of Scarlett Road and north of St. Clair Av. W.
​
Frank and Jimmy looked at the houses still being built on Foxwell Street and felt they could do better. Their goal was to build homes with expensive features, like the houses in The Kingsway, only smaller. They did extensive research on house designs, and when prices fell during the Depression, they were able to purchase land on Delemere Avenue and find high quality construction materials at low prices. They built two houses together, then Frank built four houses on the street and Jimmy built seven. As Frank gained experience, he developed his own unique style. The house seen below that he built at 72 Delemere is considered a small masterpiece – an English cottage with a double chimney, stone front, leaded windows, and curving Tudor-style wooden trim. 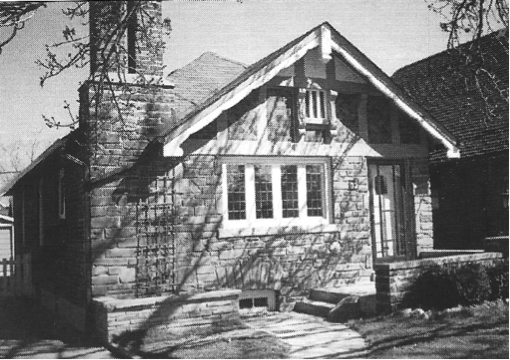 House built in 1931 by Frank Ridley at 72 Delemere Drive (Source: Memories of Lambton Park)
Kingsway developer Robert Home Smith was so impressed with Ridley’s work that he invited him to build houses in The Kingsway without requiring design approval from one of Home Smith’s own professional architects - one of only two builders to whom Home Smith ever granted this exception. Frank built at least 10 houses in The Kingsway between 1931 and 1936, favouring quaint cottages made from Humber River stone, with bay windows and leaded glass. 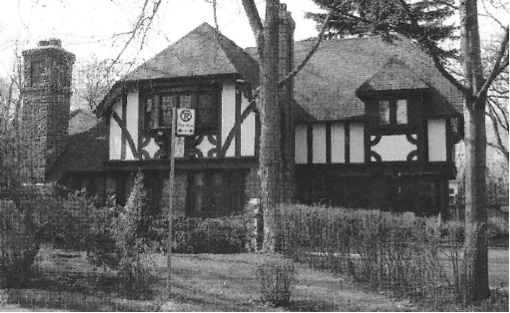 18 Tremayne Avenue in The Kingsway, designed and built by Frank Ridley in 1936 (Source: Jon Maxim)
In 1933, Frank and Jimmy made a trip west to Manitoba to visit the old homestead. While there, a romance developed between Frank Ridley and June Packer, sister of Alfred Packer. Frank and June married in 1934 and in 1939 their only child, Janice, was born. In 1935, Arthur Packer, who was a professional sculptor, moved from Manitoba to Toronto where there were more opportunities for work.

Frank continued to build houses, including what is considered his masterpiece: a beautiful mansion called “Briarcrest” that is hidden from view on the southwest corner of Islington Avenue and Dixon Road, built for movie executive Clair Haig in 1935. Arthur Packer carved all of the woodwork for this house. 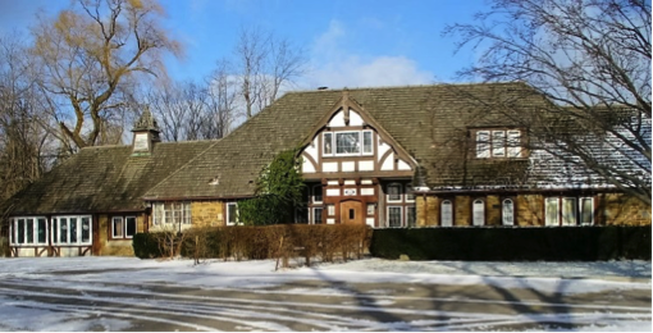 A view of the main entrance of “Briarcrest”, taken from the southwest in the 1980s. (Source: Urban Photo)
​In 1945, Frank built a new house for his family on the north side of Burnhamthorpe Road between Kipling Avenue and Martin Grove Road. 289 Burnhamthorpe Road was designed it in a French Provincial style, inspired by rural homes in 17th century France, but rather uncommon in Canada outside of Quebec. One and a half storeys tall, it has a steeply-pitched hipped roof with a ridge that parallels the front of the house. Its overhanging eaves flare slightly upwards. There are three gable-style dormers in the upper half-storey. The main floor exterior is clad in natural stone. All of the main floor windows are tall and multi-paned, reminiscent of a traditional French-style. The wood trim is painted yellow, green and mauve even today. 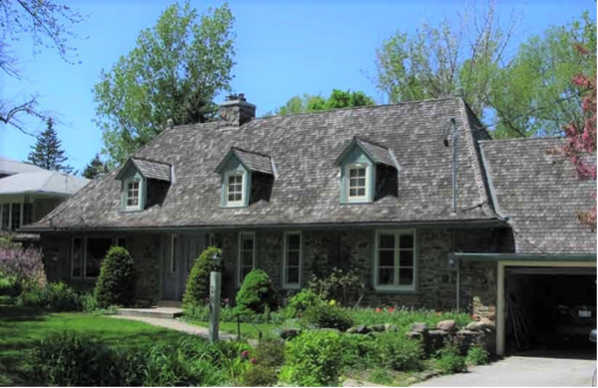 289 Burnhamthorpe Road in the summer of 2015 (Source: TOBuilt)
Frank also built a log cottage on Georgian Bay in Tiny Township where the family spent much time.

​In 1942, Frank felt that he finally had the time and income to explore the archeology of Canada in earnest.  He decided that his first major project would be to find the locations of two sites of the Huron-Wendat Bear Nation: Ossossane Village and Ossossane Ossuary. They were described by Father Jean Brebeuf in The Jesuit Relations, detailed reports written by Jesuit Missions in New France from 1632 to 1673. Using measurements recorded by Brebeuf, Frank discovered the exact locations of both sites. He then persuaded the Royal Ontario Museum to excavate and verify the authenticity of the sites by comparing all of the artifacts he found with Brebeuf’s notes. He next persuaded Toronto millionaire Sir Ellsworth Flavelle to fund the purchase of the land where both sites were located. Frank constructed the carved wooden sign seen below for the Ossuary site, which still marks the site on County Road 6 South in Tiny Township today. 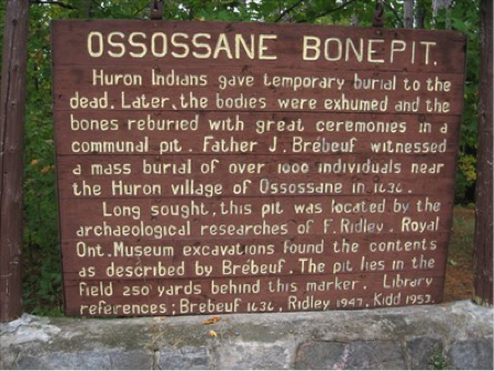 (Source: waymarking.com, 2014)
Frank then turned his attention further north, exploring lakes and rivers by canoe, often accompanied by his wife or his good friend, Paul Sweetman. He eventually found the Frank Bay multi-level pottery site on Lake Nipissing and assembled a team of five who explored the site for the next three summers. He also did excavations at Lake Abitibi near Cochrane and on the Michipicoten River, discovering both Plains and Iroquoian pottery. He next explored sites of the Neutral Confederacy in the Hamilton/Niagara area.

By now Frank had become such a knowledgeable self-taught archeologist that the Encyclopedia Canadiana rated him among the few “thoroughly competent amateurs” exploring archeological sites in Canada. As an indication of the extent of his renown, in 1959 Frank was invited to visit the People’s Republic of China as their guest, with four other Canadians of his choice. While there he studied China’s intensive archeological program and gave the Chinese seventy artifacts he had collected from Canadian indigenous sites. These items were the first the Chinese had ever received from North America and they displayed them in the Department of Archeology in Peking (now Beijing.)

The Ontario Government sent Frank north several times to search for the locations of abandoned former Hudson Bay Company trading posts. Frank was accompanied by his wife on these trips. He rediscovered the location of Henley House in the Kenora area - the first post established inland. He also found a former post on Hayes Island in the Moose River.

Frank had been a founder of the Ontario Archeological Society in 1951. In 1969, they appointed him Honorary Member for Life and awarded him their first Medal for Outstanding Achievement.

​Eventually Frank owned the largest private archeological collection in Ontario. However, he believed that in the long-term, artifacts should remain in the area they were found. Many of his artifacts are in Sainte-Marie among the Hurons in Midland and other museums in Huronia, while he gave other collections to Laurentian University in Sudbury. 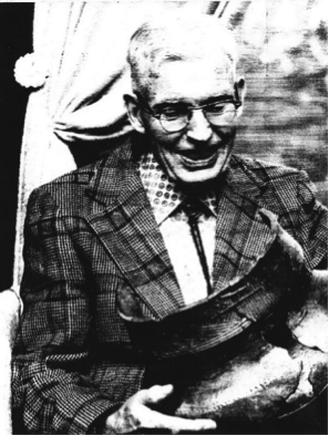 Frank Ridley holding a large pottery artifact (Source Unknown)
In addition to his archeological work, Frank was an active conservationist. When Montgomery’s Inn was in danger of being demolished in the early 1960s, Frank was an active lobbyist for its preservation. He was also instrumental in saving Fort York from demolition. Frank worked for fifteen years with the Humber Gun Club to reclaim a 2,300-acre wetland near Elmvale, eventually succeeding. Today it is the Tiny Marsh Provincial Wildlife Area.

In his 60s, Frank developed Parkinson’s disease, which ultimately ended his field explorations. Nevertheless, at the request of the Ontario Government, he kept working, spending hours refining and expanding his 119 original reports. He worked at his cottage with June’s assistance and supervised volunteers who did additional field work on some of the sites. These reports can now all be found in the Ontario Archives.

Sadly, Frank and June’s daughter, Janice, died of cancer in November 1984. Frank passed away four months later at the age of 81 after a life of energy, learning, purpose and giving. Fittingly, June scattered Frank’s ashes over Tiny Marsh. June lived in the Burnhamthorpe house until 1992 and then moved into an apartment, passing away herself in 2001.

The Lucki Family bought 289 Burnhamthorpe Road from June. They erected a plaque adjacent to the front door that reads “Ridley Cottage” in honour of Frank Ridley, an extraordinary individual who lived a fascinating life and who built this unique house.