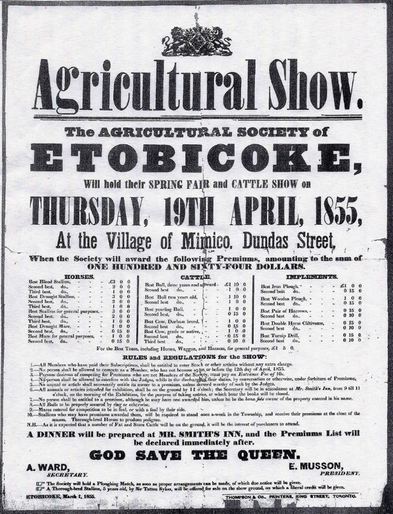 This flyer is advertising the Etobicoke Agricultural Show being held in the Village of Mimico (later called Islington) on Dundas Street in the spring of 1855. Montgomery’s Inn/PHOTO
In April 1855, the Agricultural Society of Etobicoke held their first fair in the Village of Mimico (renamed “Islington” in 1860.) It was held in a large tent erected on the property of innkeeper Thomas Smith on the southwest corner of Dundas and Islington.

Here neighbours competed good-naturedly against one another for the best horses, cattle, sheep, apples, butter, pickles, bread, pies, crochet work, lace, quilts, and so much more. Prizes were awarded at a dinner held at Smith’s Golden Lion Inn that evening. Attendees came not only from Etobicoke, but also from Toronto, Yorkville, Brampton, Vaughan, Cookville, York Township, York, King, and Toronto Township (Mississauga.)

This was an era when Etobicoke’s economy was based on agriculture, with about 60% of the land under cultivation. By 1878, that number would increase to 90%. The Home District Agricultural Society had been formed in 1830 to assist farmers in importing better quality seed and purebred livestock. They promoted annual fairs so farmers could exhibit their produce, compete for prizes, and share knowledge. Over time, most townships had their own societies and held annual fairs.

Names of well-known Islington pioneers are easy to find in newspaper lists of prize-winners: Edward Musson, 1st (£12) for his excellent field of turnips; Samuel Wood, 1st, for a pair of feather-legged Bantams; and John Moore, 1st (£1) for 10 yards flannel and 1st (£1) for a Pair of socks, Canadian wool.”

Records show that between 1855 and 1872 Etobicoke’s fairs were held on the Islington area properties of Thomas Smith, Donald McFarlane, and Benjamin Johnston, and once in Thistletown on Henry John Boulton’s farm.

In 1872, the fair was moved to a large open area rented from Thomas Montgomery where the playing field behind Islington Junior Middle School is located today. That same year, local builder David L. Streight erected a single storey frame building 12 M by 15 M (40 ft. by 50 ft.) with a tower and flagstaff to be used as an Agricultural Hall. Perhaps it also had a lot of glass windows as local residents dubbed it the “Crystal Palace” after the original Crystal Palace erected in London, England in 1855. For awhile, Etobicoke called its fair “Donnybrook Fair” after one of the same name founded in Dublin under a patent granted by King John of England in 1204.