Etobicoke Column a ‘Labour’ of Love’ for This Historian 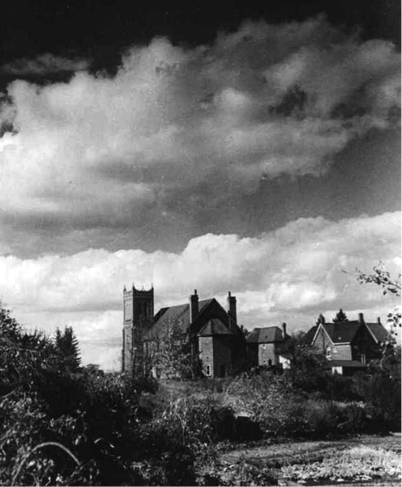 Islington Village ca. 1930 looking north at the rear of buildings on south side of Dundas St. W., east of Cordova Av. L to R: Islington United Church, Church Manse (now 4883 Dundas St. W.) and house of Etobicoke Reeve John Dillon Evans. Montgomery’s Inn/ PHOTO
It was in December 2013 that Grace Peacock, Managing Editor of the Etobicoke Guardian, asked if I would be willing to write a bi-weekly column for them on Etobicoke History. I was a bit nervous at the prospect, but also excited to have this opportunity to share the history of Etobicoke with all of you.

My first Guardian column appeared on December 26, 2013, so you are now reading my third anniversary column! Looking back, I wouldn’t have missed this opportunity for the world. I hear from readers after every column is published, giving me much appreciated feedback, sharing their own stories, suggesting topics, and asking questions.

Friends ask why I would take on this extra work since I’m “retired.” But you see, doing historical research is not work – it’s a passion, a labour if love if you will. As my two daughters revel in telling me, I’m a full fledged “history nerd.” When I’m on the trail of an historical fact, I turn into a history detective – a rather tenacious one.

Each column starts with choosing an old photograph and the story flows from there. I try to cover all parts of Etobicoke, although there are more photos available of some areas than others. My primary photo source is the collection at Montgomery’s Inn. The photo I chose for this column is from there and it’s one of my favourites – in fact I use it as my screen saver. I love the clouds that dominate the scene and the unusual backyard view of Dundas Street.

It can take many hours to write one column, depending on how much information I already have on the subject. My goal is to verify every fact whenever possible, which adds to the time but I believe this to be an absolute necessity.

Writing “History Corner” has put me in touch with so many wonderful and generous people, and I’ve learned so much from them. After a column on Octavius Hicks of Humber Bay, I received an e-mail from his great grandson, John Hicks. John and I have since exchanged dozens of e-mails, and he has sent me at least 75 photographs, multiple newspaper clippings, and family stories that I have been able to use.

A few other examples… Nelson Moody has sent me family photographs and his memories of growing up in the Highfield area of Etobicoke. I used the information to write a column on Highfield’s school. I recently received new photographs of the Dixon family from descendant Judy Perry, and new photos of the village of Claireville from Dave Rowntree who grew up there. These photos will be invaluable for future columns.

My greatest satisfaction is knowing that the column is being read and appreciated. Thank you for reading it and thanks to those who have written to me. I’ll keep writing the column if you promise to keep reading it!