A few years ago, I decided to have a look at every one of the approximately 275 addresses in Etobicoke listed on the City of Toronto’s Inventory of Heritage Properties.  When I got to 2095 Codlin Crescent, I found a homely, rundown house in what is now the rather depressed village of Claireville in northwest Etobicoke.  The house was unoccupied, with a “For Rent” sign posted to a tree, its grass uncut, and its bushes so overgrown that many windows were completely obscured.  It didn’t look particularly old, and unlike most buildings on the Inventory, it was in poor condition.  How did this forlorn building, surrounded mostly by industry, get on the Inventory?  So I started researching the house to see if I could uncover its story. 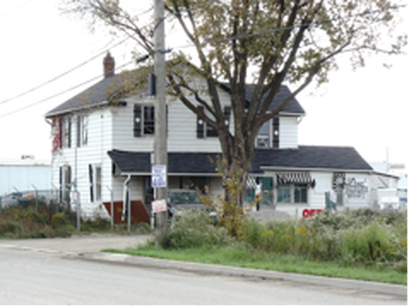 Claireville Tollhouse, Built in 1854.
Claireville was once a vibrant village overlapping the three townships of Etobicoke, Vaughan and Toronto Gore.  The village began around 1832 with the opening of John Dark’s Halfway House on the southwest corner of Steeles Avenue and Indian Line.  A post office called “Humber” opened in Robert Bowman’s general store in 1842, named for the West Humber River that ran through the community.

Jean du Petit Pont de la Haye was called the “Father” of Claireville. Born in France in 1799, he moved to Britain to teach in 1828 where he met the Lt. Gov. of Upper Canada, Sir John Colborne, who asked him to become the French Master at Upper Canada College which he was opening in York (Toronto) the following year.  De la Haye accepted the offer and taught French at the college for 27 years.  He and his family lived on the school’s campus when classes were in session, but at other times of the year and after retirement they lived at their country home, Les Ormes (The Elms,) built in 1840 on Steeles Avenue in Toronto Gore Township, just half a mile west of the Etobicoke border.

In 1840, De la Haye also bought Lot 40, Concession 4, a 100 acre lot located in the very northwest corner of Etobicoke.  In 1849, he registered a plan to subdivide the western portion of this lot into a village he named Claireville after the eldest of his six daughters.  This plan consisted of 74 town lots, most a half acre in size, and three new streets: Alcide St. (named for his son), Pauline St. (named for another daughter) and William St.

With support from de la Haye, Claireville grew.  He donated land in the village to build churches for three different denominations. He also hosted the annual agricultural fair and community parties on his farm, and served as a Justice of the Peace and Councilor in Gore Township after his retirement. The growing village became the service hub for the surrounding farming community.  By 1870, its population was 175 and there were two hotels, two general stores, one butcher, one blacksmith, one tailor, one cabinet maker, and one steam-powered grist mill.

In 1846, the Albion Plank Road Company was incorporated, with plans to build and operate a plank toll road from Weston, through Etobicoke, and on to Bolton. De la Haye was a director and major shareholder in this company.  Albion Plank Road formed the main street of Claireville (although I soon found out that, in the village, it had been renamed Codlin Crescent in the late 1980s.)  The company’s plan included a tollgate in Claireville, and their first gate was located on Highway 50 at Gore Road, in Toronto Gore Township.

However, around 1861, the tollgate was moved into Etobicoke. The tollkeeper in 1861 was Thomas Wilkis, and in 1866, it was his son, Robinson Wilkis.  By the 1871 census, the tollkeeper was Christopher Armstrong.  2095 Codlin Crescent was the location of the Claireville tollhouse during Armstrong’s tenure, as verified by Armstrong’s descendants and previous residents of the house and village, who have always referred to this house as “The Tollhouse.”

Now being a tollhouse is an excellent reason for listing this building as a heritage property!  For a long time now, it has been thought that the only original tollhouse remaining in Toronto is the one now sitting on the northwest corner of Bathurst Street and Davenport Road, but now we know there is a second one - forgotten and unknown - in Etobicoke.

There is also a good possibility that this house was originally built to be the tollhouse, and that the Wilkis father and son also lived there when they were the tollkeepers in the 1860s.  This house differs from other houses in that the front door faces west, instead of north towards the street like all of the other houses on that street.  The tollgate would have crossed Albion Road adjacent to the northwest corner of the house, making it very easy for the tollkeeper to step out his front door, collect the toll, and then open the gate.

Clearly the house was older than it looked to me initially.  Land registry and tax assessment records have verified that 2095 Codlin Crescent was actually built in 1854.  It is the oldest remaining building in Claireville and one of the top dozen oldest in Etobicoke.  John Bailey built the house, apparently as an investment since he actually lived in the City of Toronto. In 1855, he sold the house to Henry Thomas. But Thomas did not live there either and likely rented it out.  From 1843 to 1886, Thomas bought and sold many small properties within Claireville, often owning up to six of them at any one time.  He was also a minor shareholder in the Albion Plank Road Company.

We know that its life as a tollhouse was likely over by 1878, as that year Armstrong was the tollkeeper at Albion Road and Kipling Avenue, three miles east of Claireville, and no one is listed as tollkeeper in Claireville itself. Further support for this idea is suggested by the fact that Henry Thomas sold the house in 1879.  In fact, by 1880, after many years of financial difficulty, the revenues of the Albion Plank Road Company were insufficient to continue in business and the company surrendered its charter. 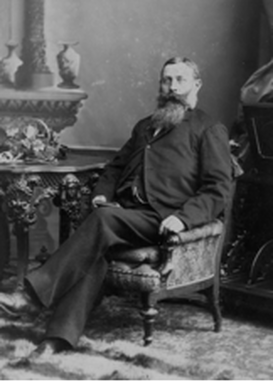 Tollkeeper Christopher Armstrong (Source: Armstrong’s great-granddaughter Beth Meade)
In the late 1980s, plans to reconfigure roads in the area to accommodate the new Highways 427 and 407 resulted in the expropriation and demolition of many buildings in old Claireville. By-passes to Albion Road and Steeles Avenue West were built around Claireville, while Indian Line was completely obliterated. What had originally been Albion and Steeles within the village were then joined at their western ends to form a crescent named Codlin Crescent after a local pioneering family.  At the same time, Pauline Street, William Street, and part of Alcide Street were permanently closed. All remaining buildings in the Toronto Gore and Vaughan sections of Claireville and along Indian Line were demolished.

As houses along the newly-named Codlin Crescent came up for sale, they were purchased for uses that were inconsistent with the existing residential by-laws, e.g. a truck driver training school, a welding school, places of worship.  In 2000, the City of Toronto “fixed” this problem by passing a by-law that grandfathered approval of all existing business uses in the village.

Today, only 14 buildings – all former residences - remain in the old village of Claireville.  Two or three are still used as homes, and at least another two are empty. Several are becoming quite dilapidated.  It looks rather like a ghost town, and it’s only a matter of time until the entire village disappears to redevelopment.

The last residential owners of 2095 Codlin were Frederick and Audrey Henderson who purchased the house in 1961. They operated their business, Highland Evergreen Supply Ltd., in a now-demolished building behind the house.  Given the direction their village was heading, they reluctantly sold the property in 2006 to a company that operates a truck and trailer storage business around the house and on adjacent vacant land, using the old house as an office.  Some days there can be as many as 100 trailers stored on site behind the house.

So, how much heritage value remains in this old house?  Certainly its historic background as a tollhouse is significant, as is its link to the era of plank roads in general.  And the house itself is a modest example of a Neo-classical dwelling from the mid-19th century.  Its basic design is a simple rectangular two-storey frame house, with a smaller two-storey wing intersecting the main part of the house at right angles on the south side.  The roof gables all have prominent cornice returns, a common feature of the Neo-classical style, and an off-centre main entry door which appears to be original.

It seems inevitable that one day soon, an application to demolish this old house will be filed by the current or a future owner.  When this happens, will it be worth the fight to save this house?   Is this a fight we could ever win against a developer in an area so obviously in need of rejuvenation?  What new use could this old tollhouse serve in the middle of an area zoned “Employment-Industrial”?  Let me know what you think!