Briarcrest Manor Bore Witness to the Fall of the Avro Arrow 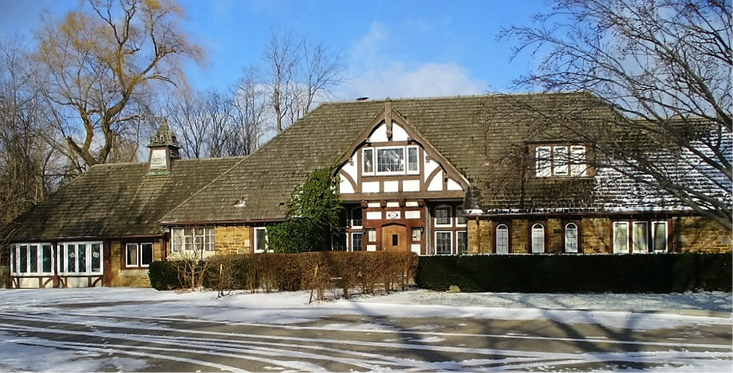 A view of the main entrance of “Briarcrest”, taken from the southwest in the 1980s. Urban Toronto/PHOTO
On the southwest corner of Islington Avenue and Dixon Road, hidden by dense vegetation, is “Briarcrest”, one of Etobicoke’s lesser-known heritage properties with a very interesting past.

Clair Hague of Weston purchased the vacant land here in 1935. As General Manager of Canadian Universal Films Ltd., he was at the forefront of the burgeoning Canadian motion picture industry. He hired Kingsway/Sunnylea architect Frank Ridley to design his dream home as an English country manor, “like one in a Douglas Fairbanks movie.” Certainly Briarcrest is considered to be Ridley’s masterpiece.
Ridley’s father-in-law, artist Arthur Packer, hand carved charming wooden figures that decorate the home. The four faces over the main entrance door represent the four Medieval social classes: jester, knight, lady, and cleric. The two-storey windows in the home’s massive “Manor Hall” overlook Humber Creek, which runs through the northeast corner of the lot.  Today, this very-densely wooded valley shields the house from the view of anyone passing by. The house also had a secret door next to the main fireplace with a stone staircase leading down to a games room and bar, and up to a private meeting room.

In November 1945, Hague sold the house to Ernest Byworth, who had worked in the radio industry and founded the Etobicoke Guardian. Unfortunately, Byworth’s wife, Ann, passed away two months later, and the house was sold in 1946 to Phyllis Langmuir, who then sold it in 1950 to Walter Deisher, President of AVRO (A. V. Roe Aircraft) in Malton. Deisher was replaced at AVRO in 1951 by Crawford Gordon Jr., one of C.D. Howe’s famous wartime “dollar a year boys”. In 1952, AVRO bought the house from Deisher to use as a retreat for company executives and a place to hold classified meetings. Gordon soon lived there full time, taking advantage of the live-in cook and servant to entertain frequently and lavishly.

Briarcrest was used extensively while plans for Canada’s ill-fated AVRO Arrow program were being developed. AVRO Canada was then the third largest company in the country, and the Arrow was AVRO’s jewel. This delta-winged hypersonic interceptor was on the cutting edge of aerospace technology at that time, with the ability to reach speeds over twice that of sound. Notable guests included Viscount Montgomery, Prince Bernhard of the Netherlands, Liberal defence minister C.D. Howe, and Prime Minister John Diefenbaker.

On Friday, February 20, 1959 – still referred to by many as “Black Friday” - Diefenbaker unexpectedly and inexplicably announced in Parliament that the entire Arrow program was cancelled. The decision instantly put 14,528 Avro employees and 15,000 employees in the supply chain out of work. The search for a valid reason for this decision continues even today.

The “AVRO” house was sold to developer Louis Mayzell in 1959. Today it bears the address 1982 Islington Avenue and has been divided into three commercial rental suites.