Mimico fisherman Bill Bonar was born in Ireland in 1886 and learned how to fish from his grandfather.  In 1912, he immigrated to Western Canada, but soon moved to Toronto where he married Letitia Attwell, also from Ireland, in 1916.  In 1918, they moved to Mimico where Bill earned a living as a fisher.

The land west of Mimico Creek on the north side of Lake Shore Bl. W. was owned by Sir Henry Pellatt until he lost the property for unpaid taxes in the early 1920s.  It was sold to the Bailey family, who gave the Bonars permission to live rent-free in an old frame pump house on the property.  The Bonars converted the pump house into a rustic home, located on the west side of Mimico Creek, just south of a tributary now called Bonar Creek, about 125 m north of Lake Shore Bl. W.  They lived there - basically as squatters - and raised their five children: two girls and three boys. 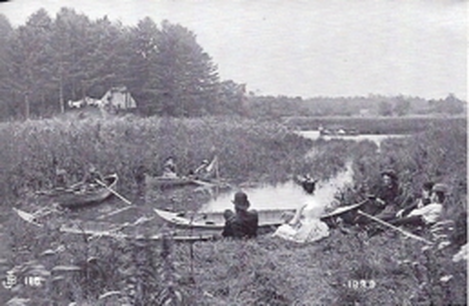 Picnickers at confluence of Bonar and Mimico Creeks in 1889. By the 1920s, this was the location of the Bonars’ houses. Source: John Boyd, Archives of Ontario, C7-1-0-0-71
After the Baileys also lost the property for unpaid taxes, it was purchased by James Crang, who started a company called Fleeceline, selling Rockwool insulation. Fleeceline Rd. to the west of Mimico Creek is still named after this former business.  Crang allowed the Bonars to stay in their house rent-free, but eventually they were required to pay property taxes to the Township of Etobicoke.

To neighbourhood kids, the Bonar property was a magical place where they were always welcome – quiet and secluded, tree-covered, in a creek valley that teemed with wildlife.  The Bonars had cages around the house holding wild animals, such as raccoons and foxes.  Children from the area would swim in the creek near the Bonar shanty in summer and skate on the creek in winter, while Mrs. Bonar tended their skinned knees.

Bill Bonar earned his living by fishing in Lake Ontario using a four horsepower putt-putt and gill-nets, initially catching 500 to 600 pounds of fish a day.  However, an article about Bonar in a 1946 Star Weekly said that by then he could no longer catch that much fish even in a whole season.  He blamed this decline on poor provincial regulations and the introduction of fish such as smelt that devoured the young of the more prized lake trout and whitefish. By then, Bonar also had to work as a night watchman to make ends meet. 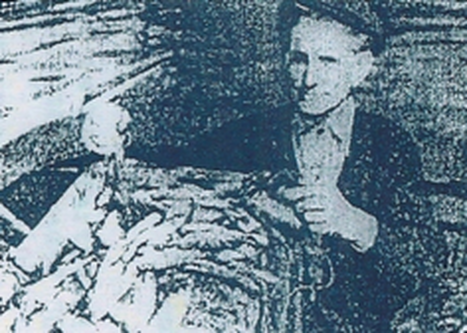 “Bill Bonar Lands Smelt - Gets Only Two Edible Fish” Source: The Star Weekly, 1946
Bonar sold his fish to markets and wholesalers, but often he also set up a stand on Lake Shore Bl. W. beside the Mimico Creek bridge to sell fresh fish to passing motorists.

When Bill Bonar died in 1964, the Toronto Telegram headline read that the “Old Man of the Lake” had died.  Letitia followed him in 1969.  When the house was damaged by fire later in 1969, the Bonar’s son, Ross, and one grandson, Graham, were still living there.  Ross says proudly that they were “three generations of squatters”.

Soon after this, an official from Metro Toronto visited and advised the Bonars that they would have to move, with no compensation for their home. The Bonars had voted Conservative their whole lives, but it was Etobicoke’s NDP MPP Ruth Grier who helped the family obtain some compensation from the Borough of Etobicoke for the property they had happily squatted on for 50 years - in exchange for leaving.

When the pedestrian bridge over Mimico Creek south of Lake Shore Bl. W. was built in 1998, there was a proposal made by local citizens to have it named “The Bill Bonar Bridge”, but the request was denied by the Etobicoke Community Council.

In the 1930s, the Humber Sewage Dewatering Plant had been built on the west side of Mimico Creek north of the Bonar home, at the end of today’s Legion Road. It closed in the 1960s when a new sewage treatment plant opened north of The Queensway, west of the Humber River. The dewatering plant building was demolished in the 1990s and the land at the top of Legion Rd. now stands empty and requires remediation before it can be developed.

Bonar Creek flows from the northwest, with its source near North Queen and Kipling.  By 1950, the entire creek north of the CN tracks in Mimico had been filled in or sewerized.  However, there is now a movement underway to restore the lower part of Bonar Creek and the marshy wetlands around it to their former natural condition.